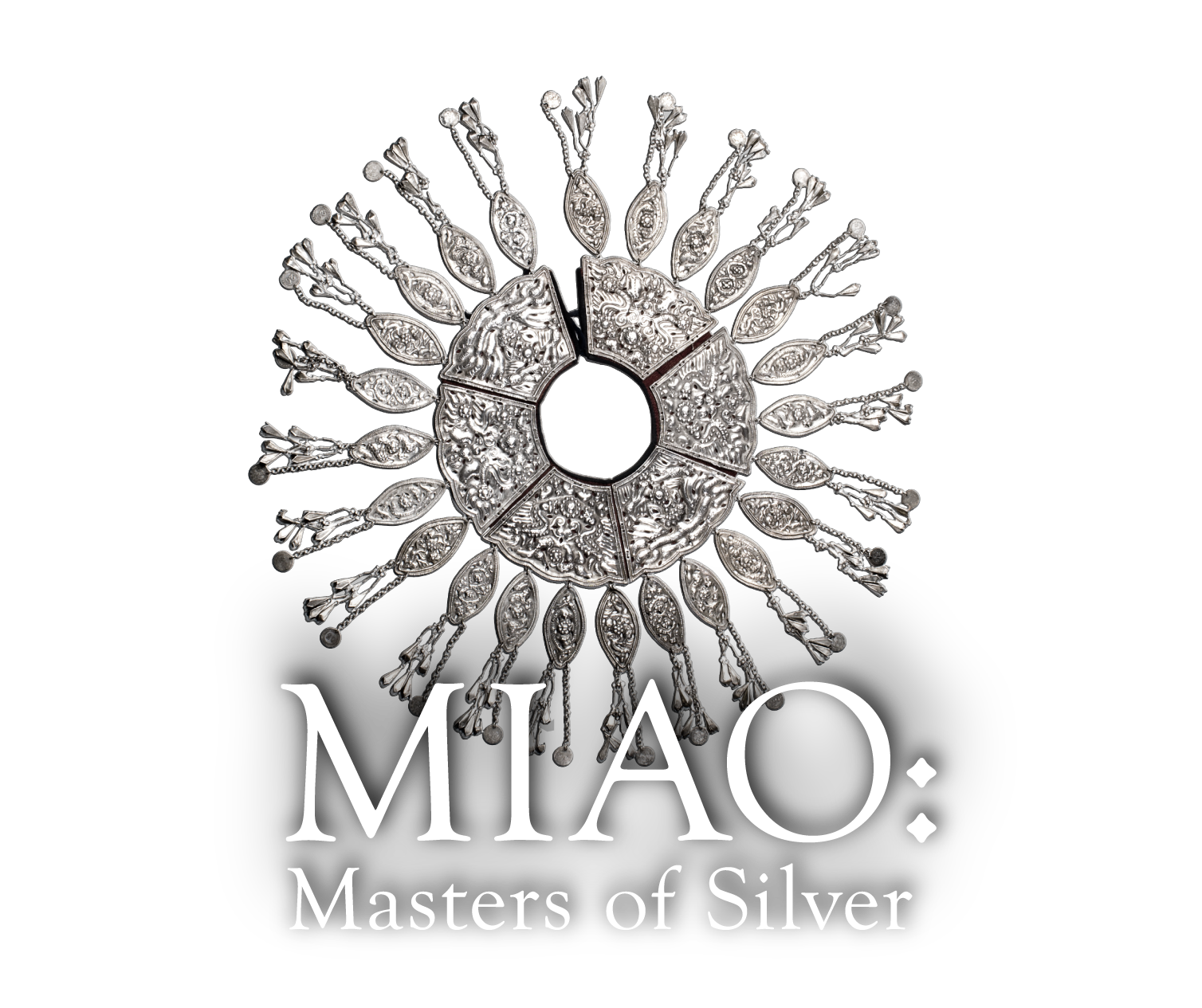 The Miao culture thrives in China’s remote southern provinces and beyond the country’s border where they call themselves Hmong. As one of the largest minority groups in China, the population of around nine million is composed of at least one hundred sixty subgroups spread across many diverse regions. Each speaks individual dialects, passes on their history orally, practices unique customs, and wears a variety of clothing styles. The silver jewelry and textiles in this gallery are primarily made in China’s Guizhou Province, where the largest population of Miao people reside. 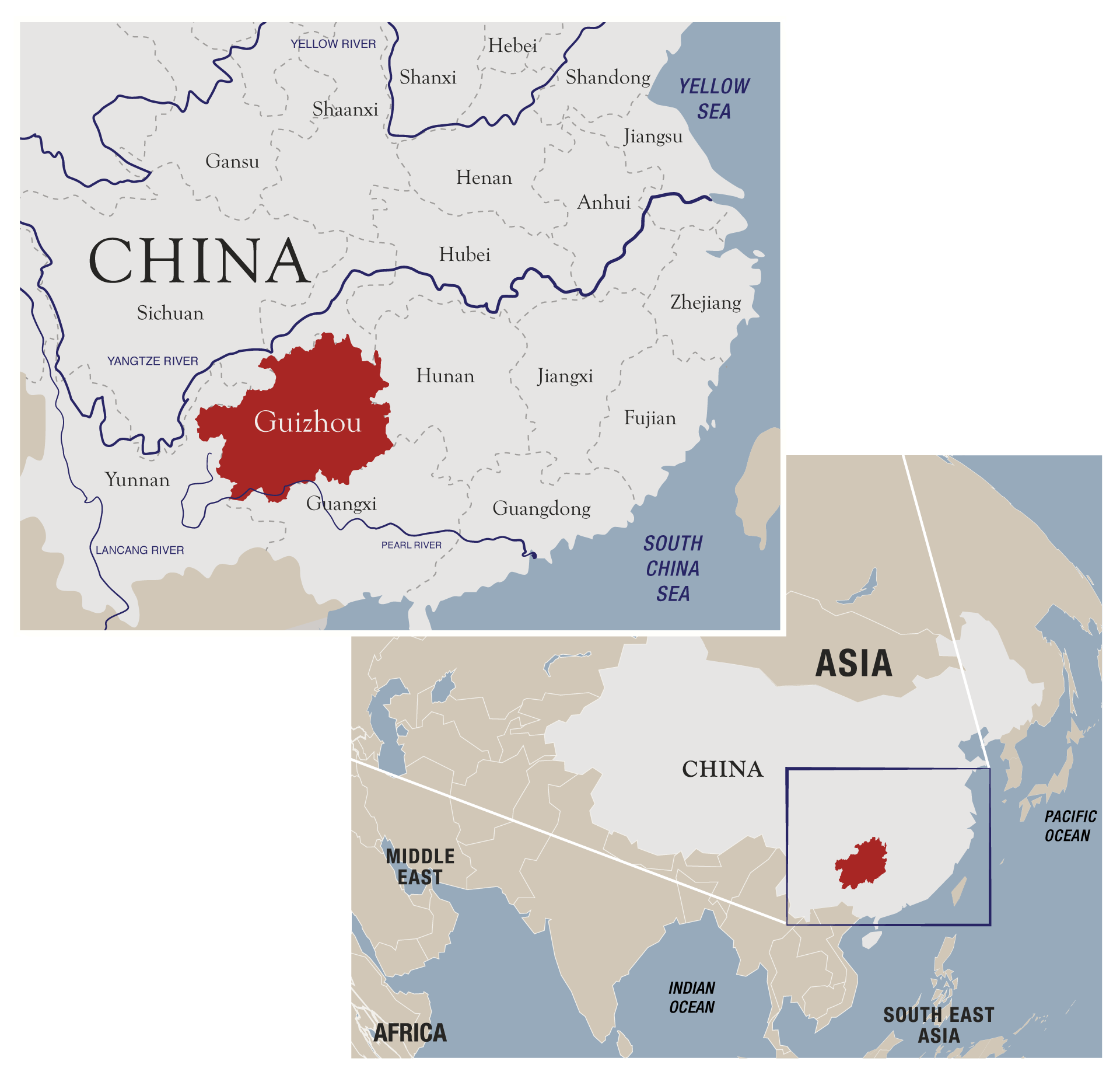 Though mostly made by the Miao, a selection of this silver was made by neighboring minority groups including the Dong, Li and Yi cultures, and is presented to illustrate the diversity of silver seen throughout the region.

Male silversmiths create a variety of ornaments through casting, smelting, repoussé (a reverse hammering technique), forging, engraving, knitting, coiling, cutting, and other methods. Concepts such as beauty, unity, fortune, and pride are expressed as visual abstractions and geometric motifs. Elements of nature in abundant forms adorn silver ornaments just as they do Miao textiles. Flowers and auspicious animals, including birds, frogs, and fish symbolic of fertility, long life, and prosperity, are especially prevalent.

Silver itself is symbolic of light, the moon, fertility, and protection against evil, but it also represents a woman’s wealth and plays a role in courtship. Families spare no expense in adorning their daughters, purchasing additional pieces as they are able. Worn mostly at festivals and weddings, a full outfit of the headdresses, combs, earrings, necklaces, breastplates, bracelets, rings, ornaments, and counterweights on display here can weigh over thirty pounds. The fine work aims to attract suitors who look at each garment as measures of the wearer’s qualities. In marriage, silver acts as a woman’s dowry and is eventually passed down from mother to daughter.

This garment was originally worn by village leaders during the Guzang festival, a celebration of a legendary couple’s lengthy courtship which takes place every 12 years in Guizhou Province. The ensemble is now part of the Miao culture’s regular festival wear.

Silversmithing in the Guizhou Province dates to the late Qing dynasty (1644-1911). Despite the region eventually becoming the capital of Miao silver production, a lack of silver veins meant that the metal was traded for rather than mined. As demand has increased over time, silversmiths have looked to a far cheaper alloy made from copper and nickel.

Miao women wear up to twelve pieces of decorative neckwear at festivals. Loose necklaces and rigid neck rings range from simple geometric forms to complex shapes created with any of the twelve metalworking techniques employed by silversmiths. 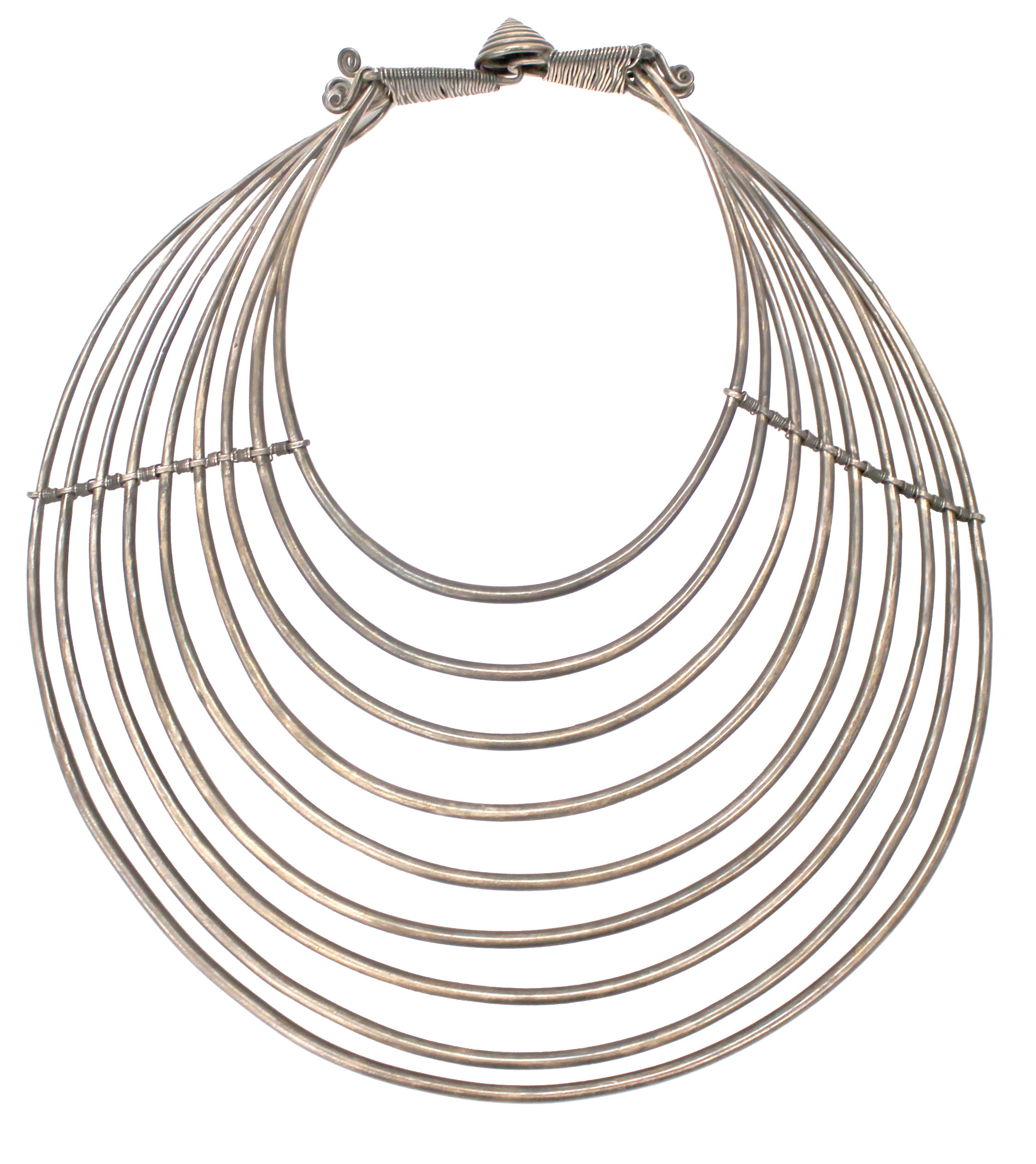 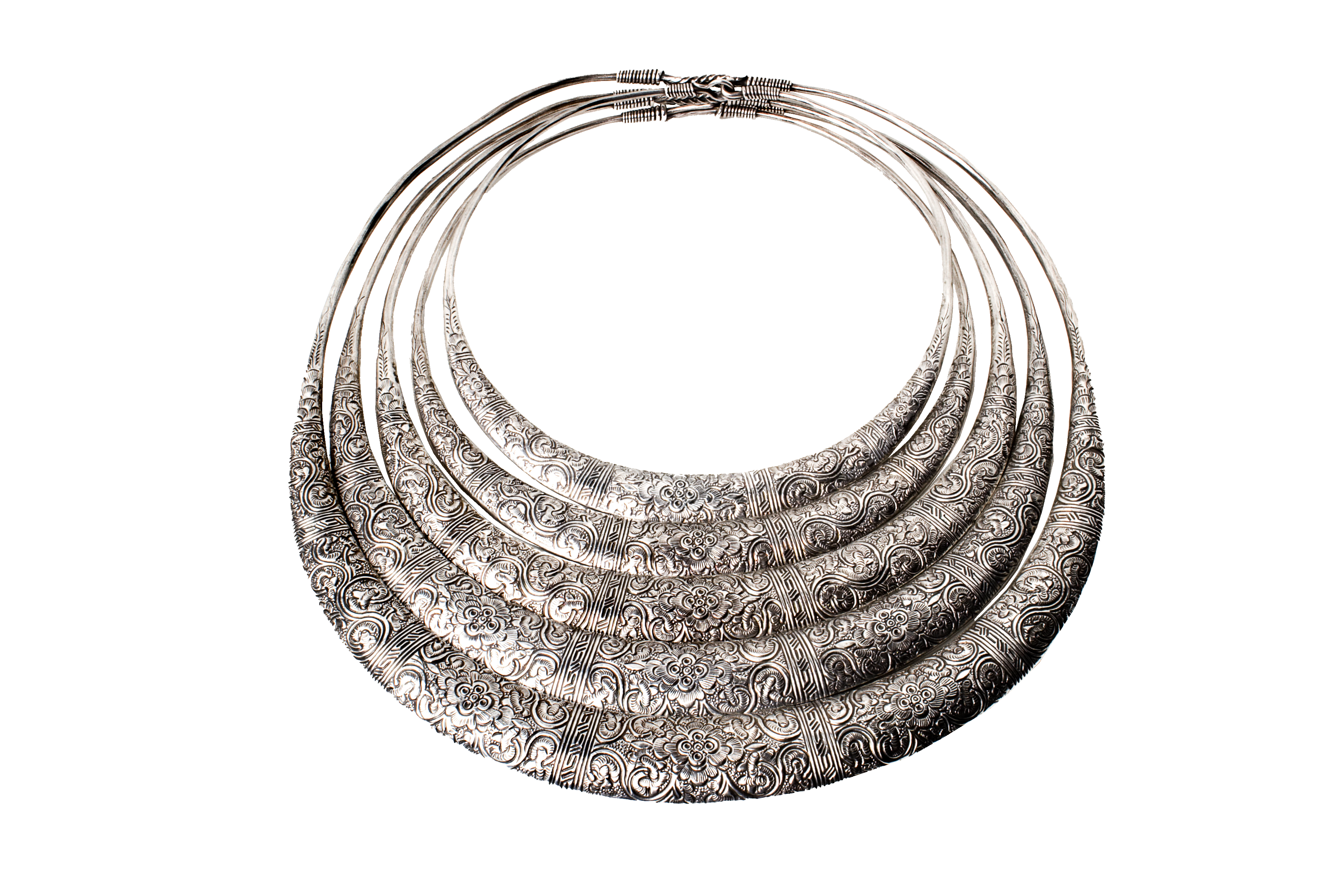 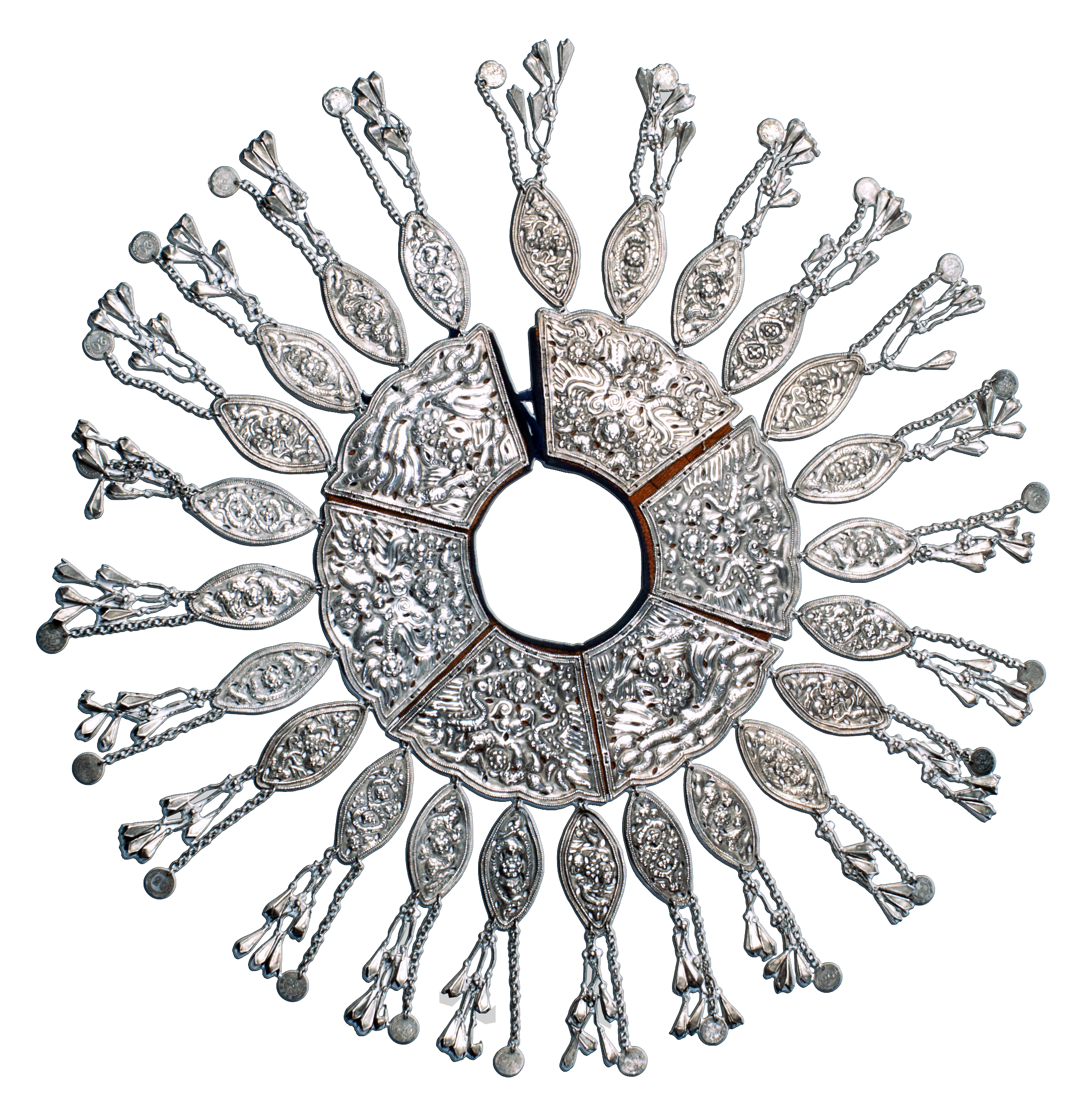 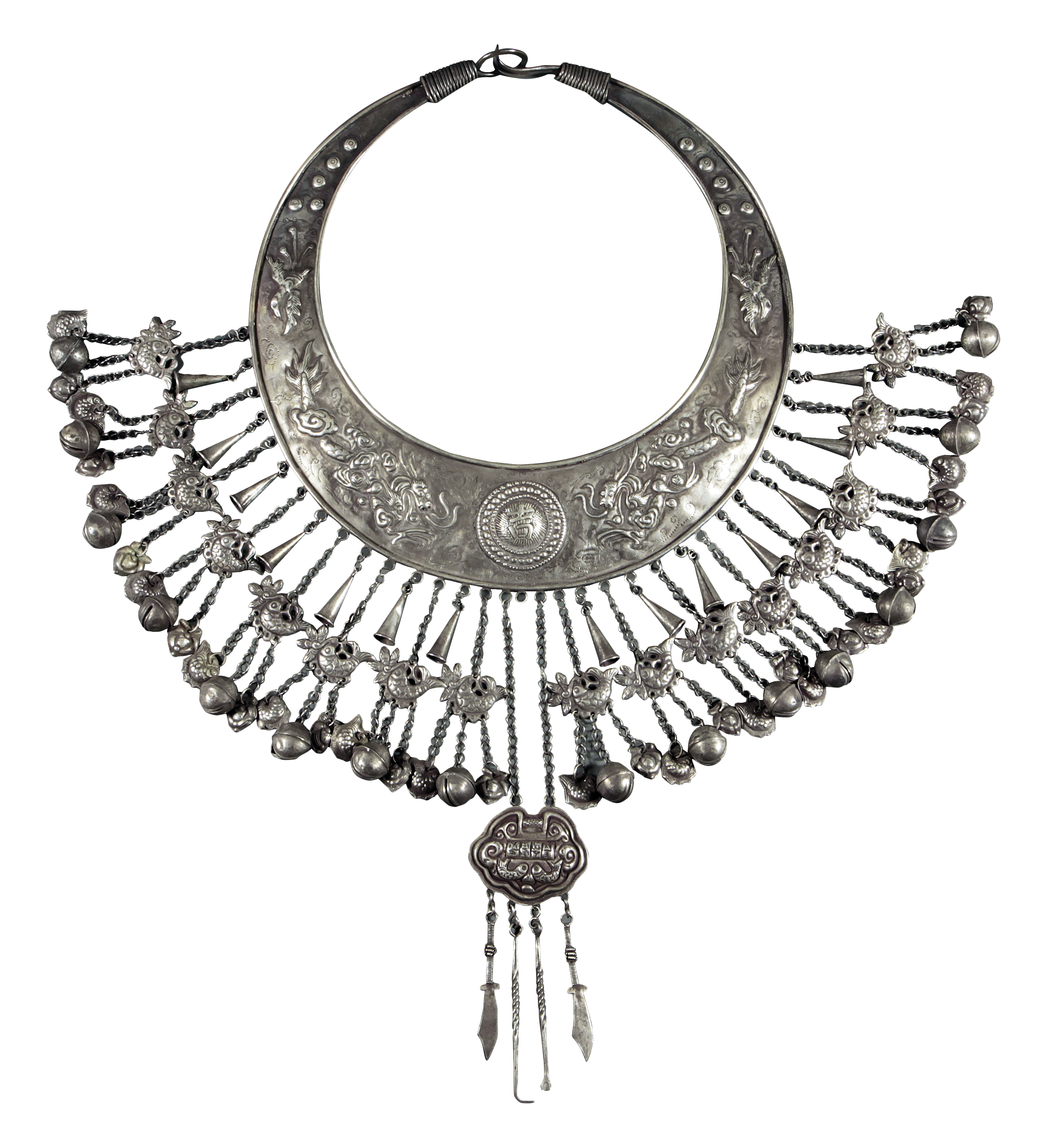 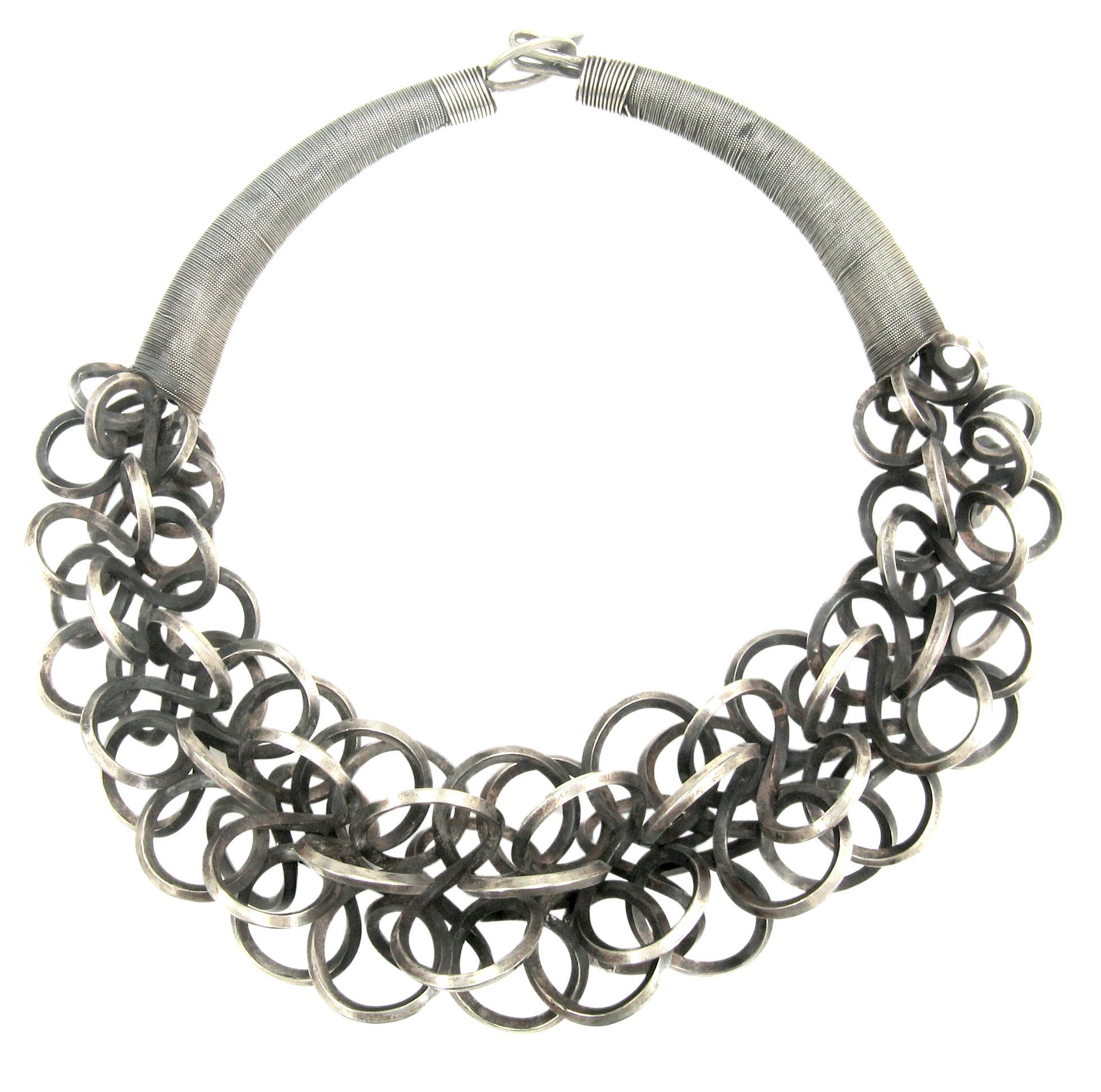 As one of the most adorned parts of the body, Miao women dedicate significant time to their hair. Wooden combs with silver plating are used to straighten one’s hair and—worn alongside hairpins—are an important part of festival regalia. 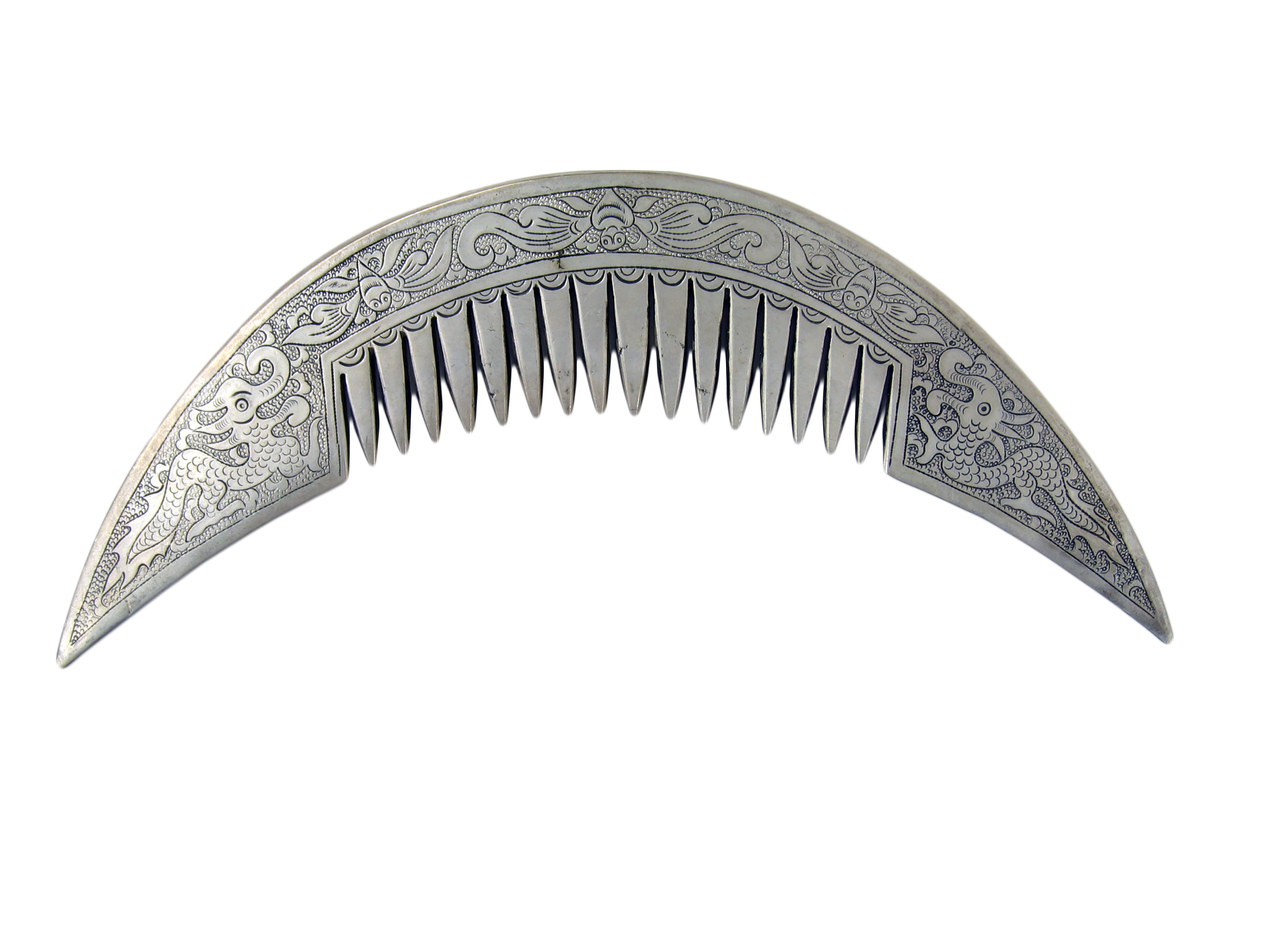 The great ceremonial headpieces worn by Chinese ethnic minority women vary widely from region to region. Perhaps the most iconic pairing is that of the elaborate floral crown and horned headdress, the latter of which is sometimes made large enough that their width and height are approximately half that of their wearer. 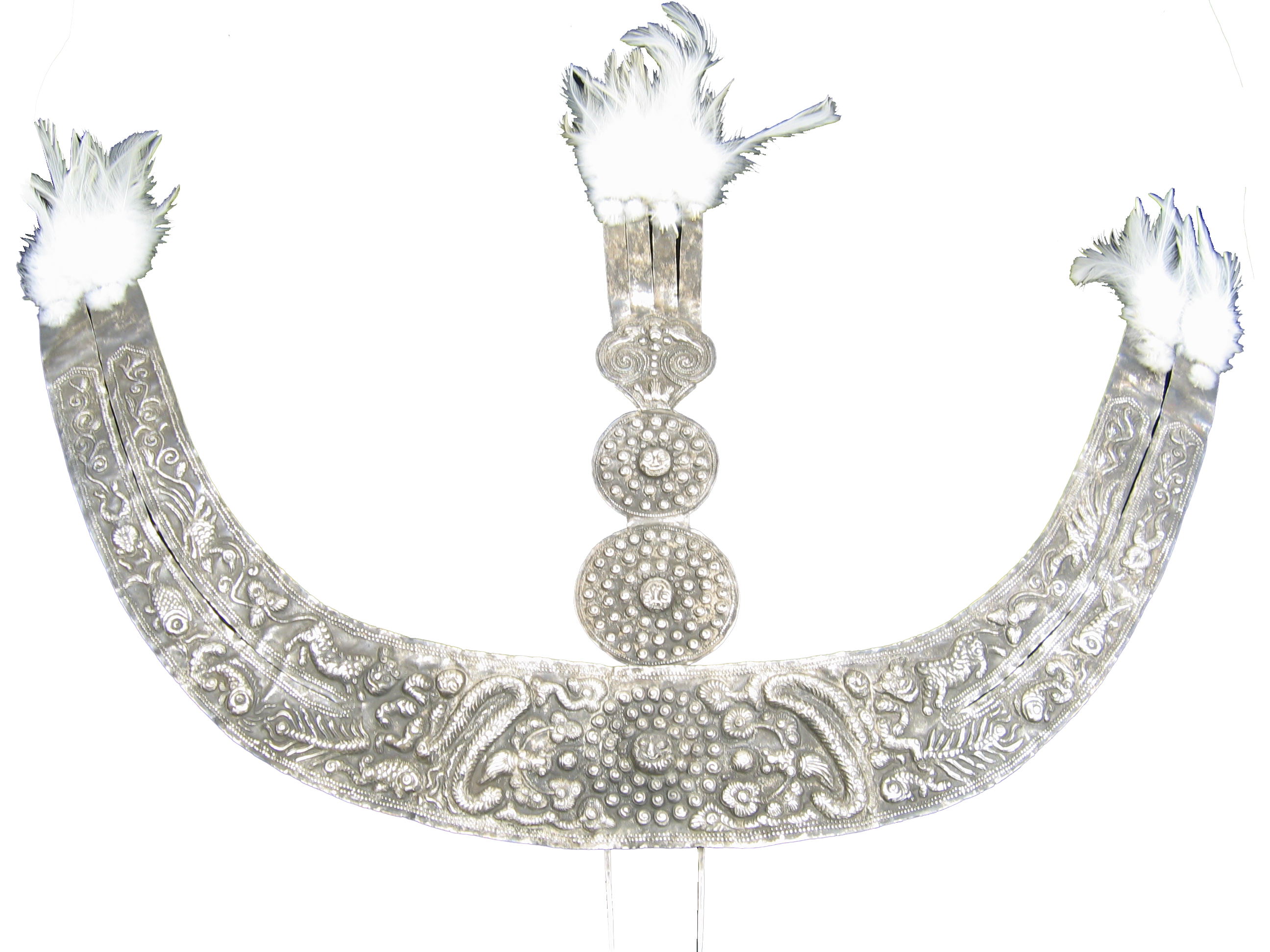 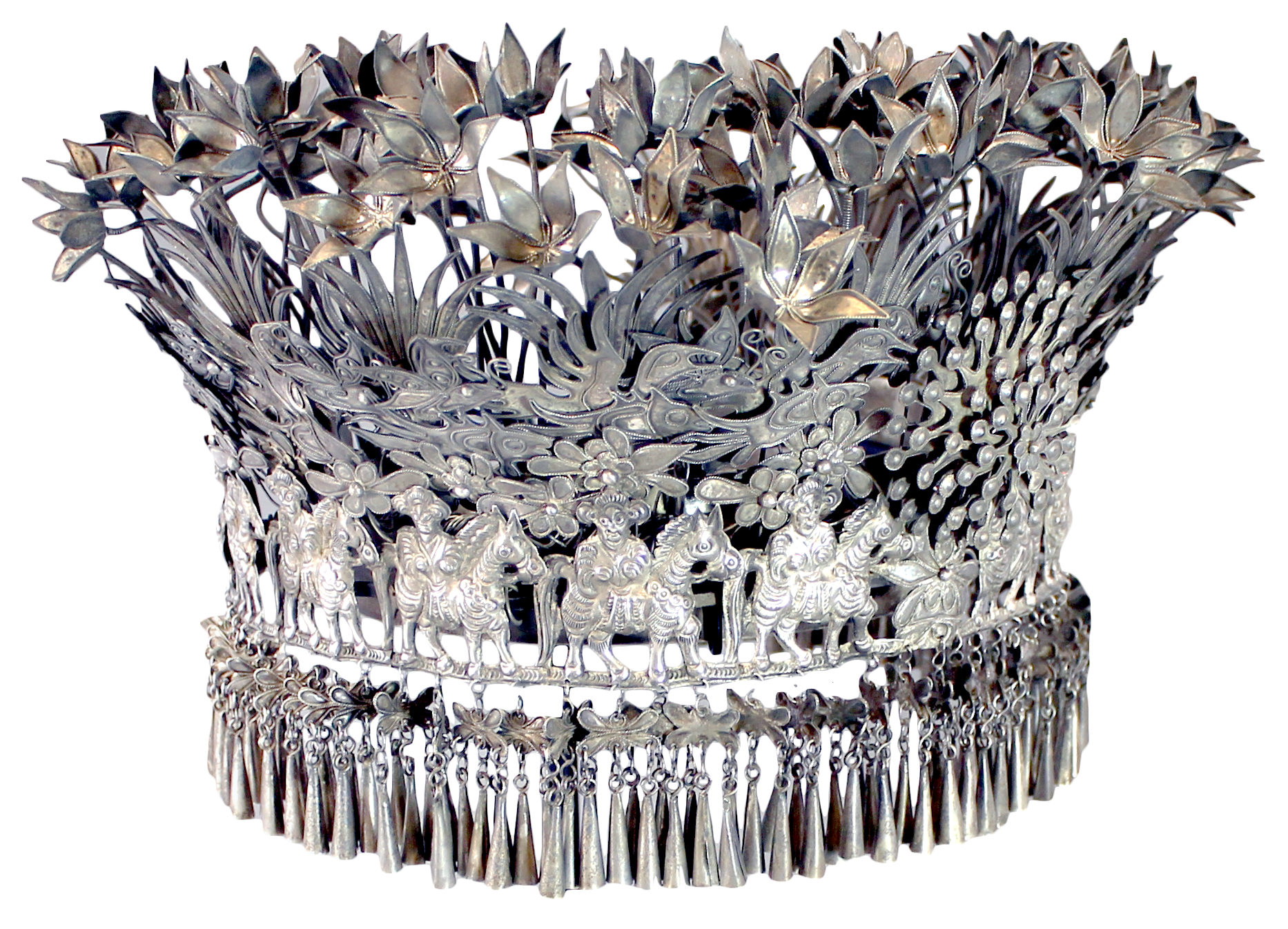 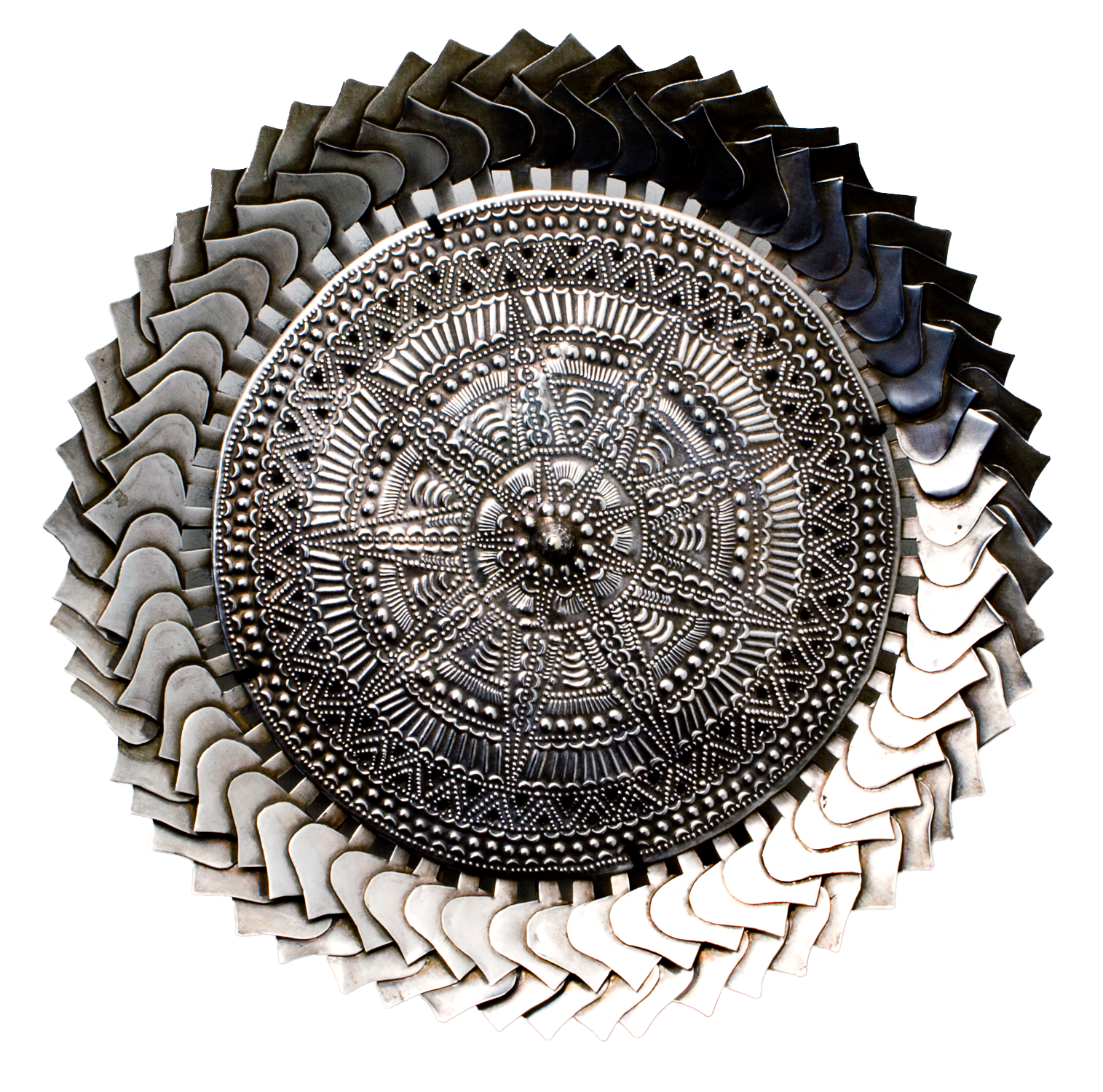 Though most silver pieces are reserved for festivals, S-shaped and knobbed counterweights are worn daily to secure and balance the weight of the aprons worn by women. 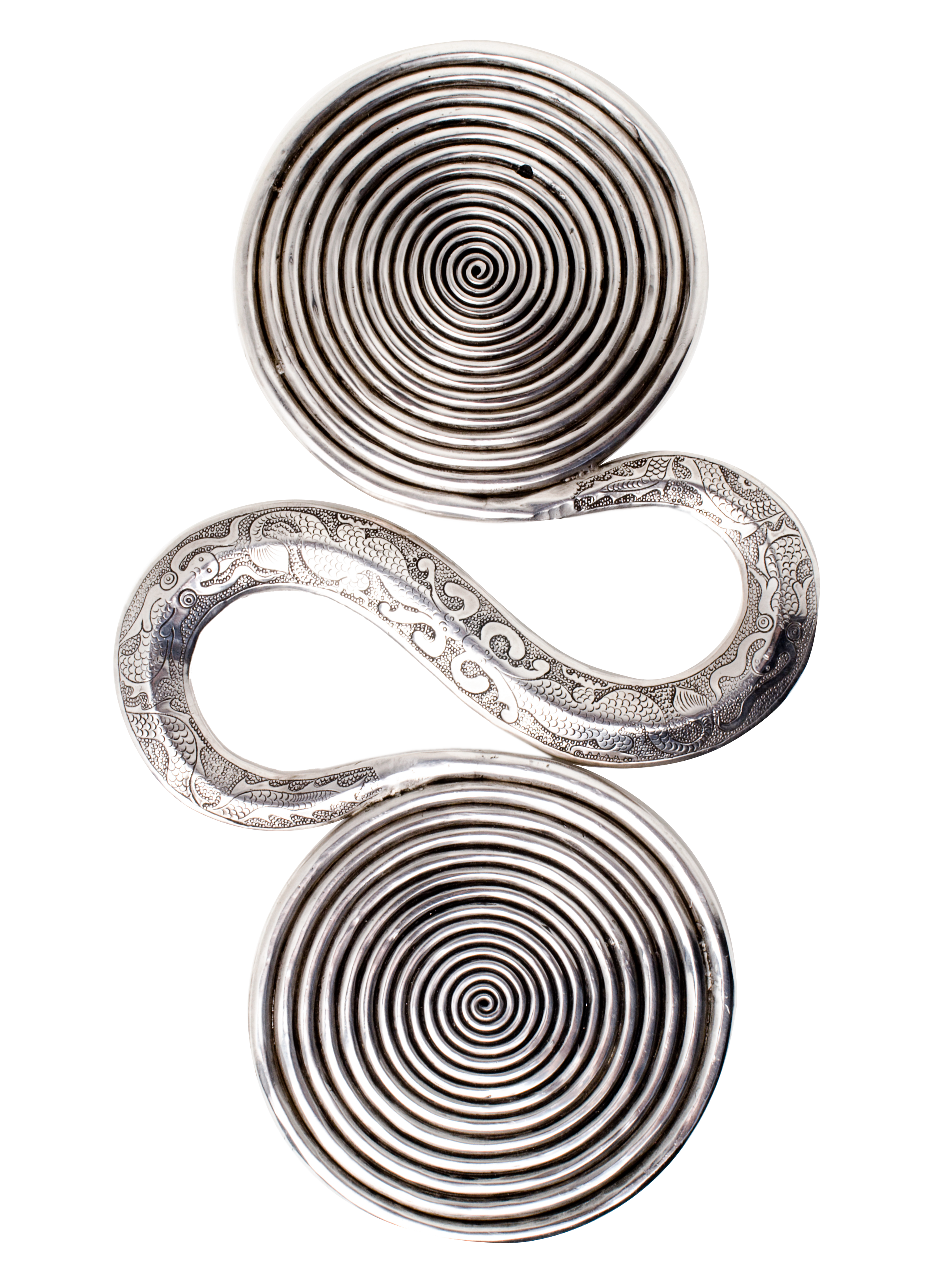 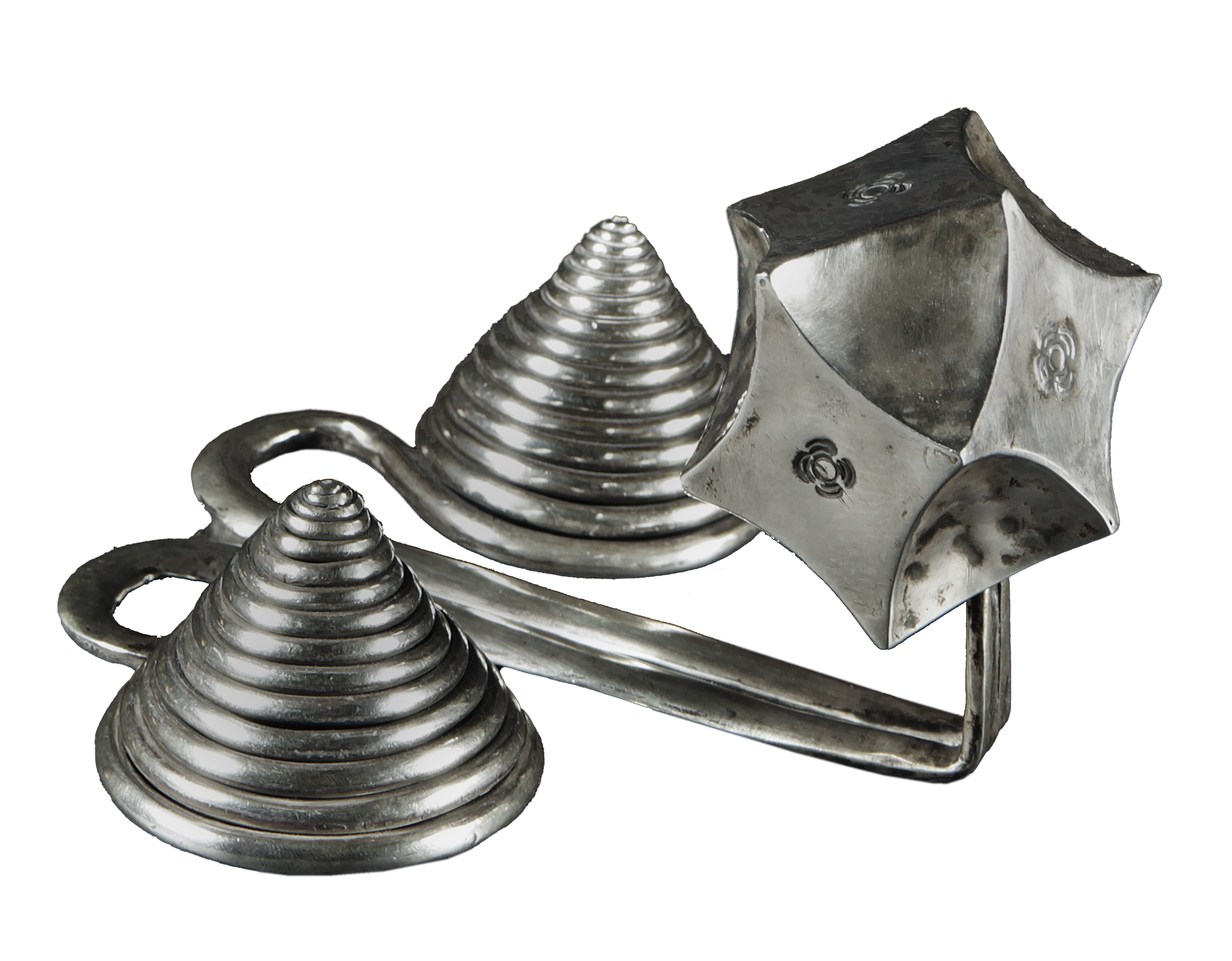 Miao belief holds that beauty is directly proportional to the level of one’s adornment. Women wear as many as six bracelets on each arm, the jingle of which sounds in concert with the many dangling chimes on head- and neckpieces. 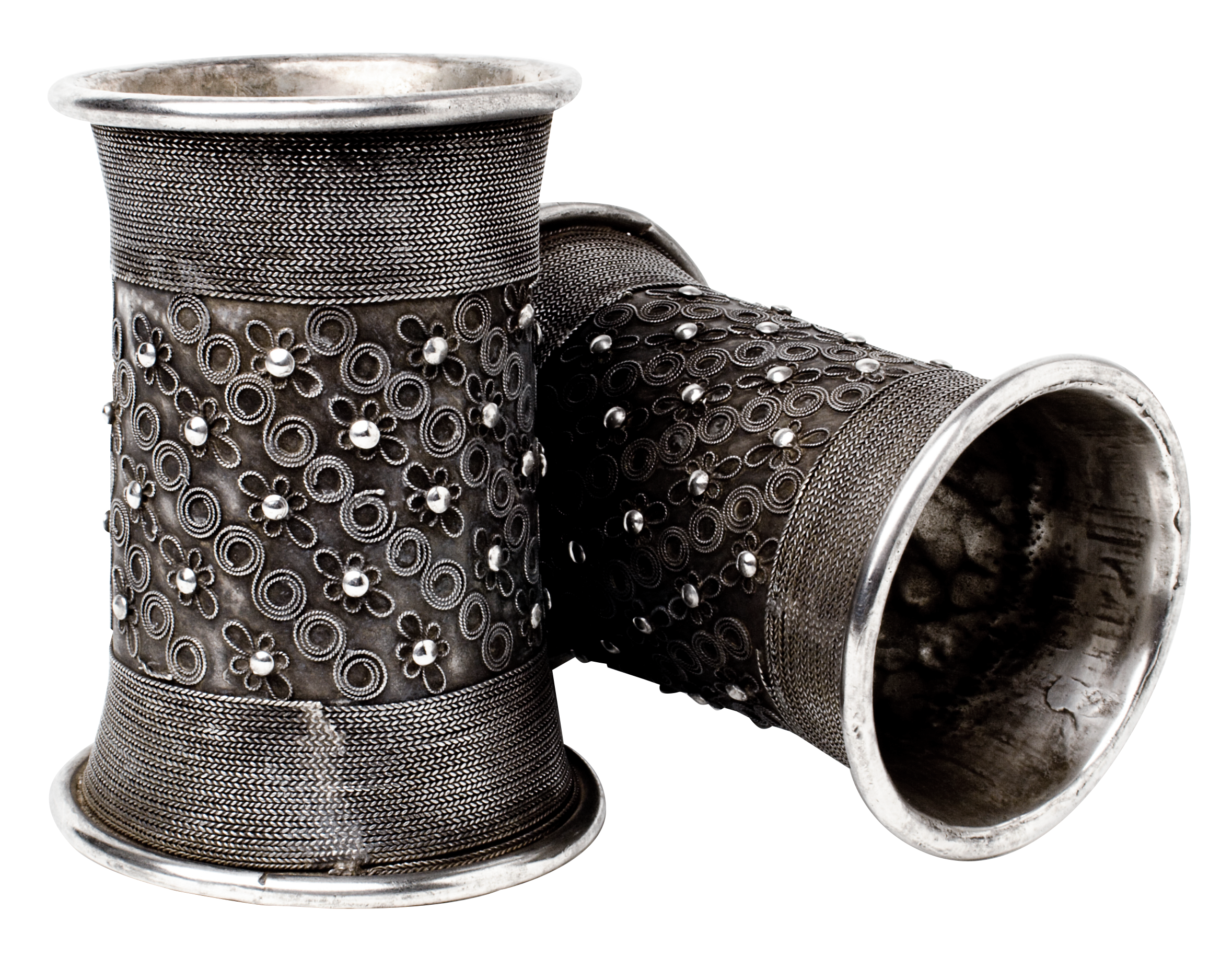 With approximately one hundred varieties, there are more kinds of earring and ear spool than any other type of Miao silver jewelry. Girls have their ears pierced beginning at relatively young ages and wear as many as four pairs of earrings on festival days. 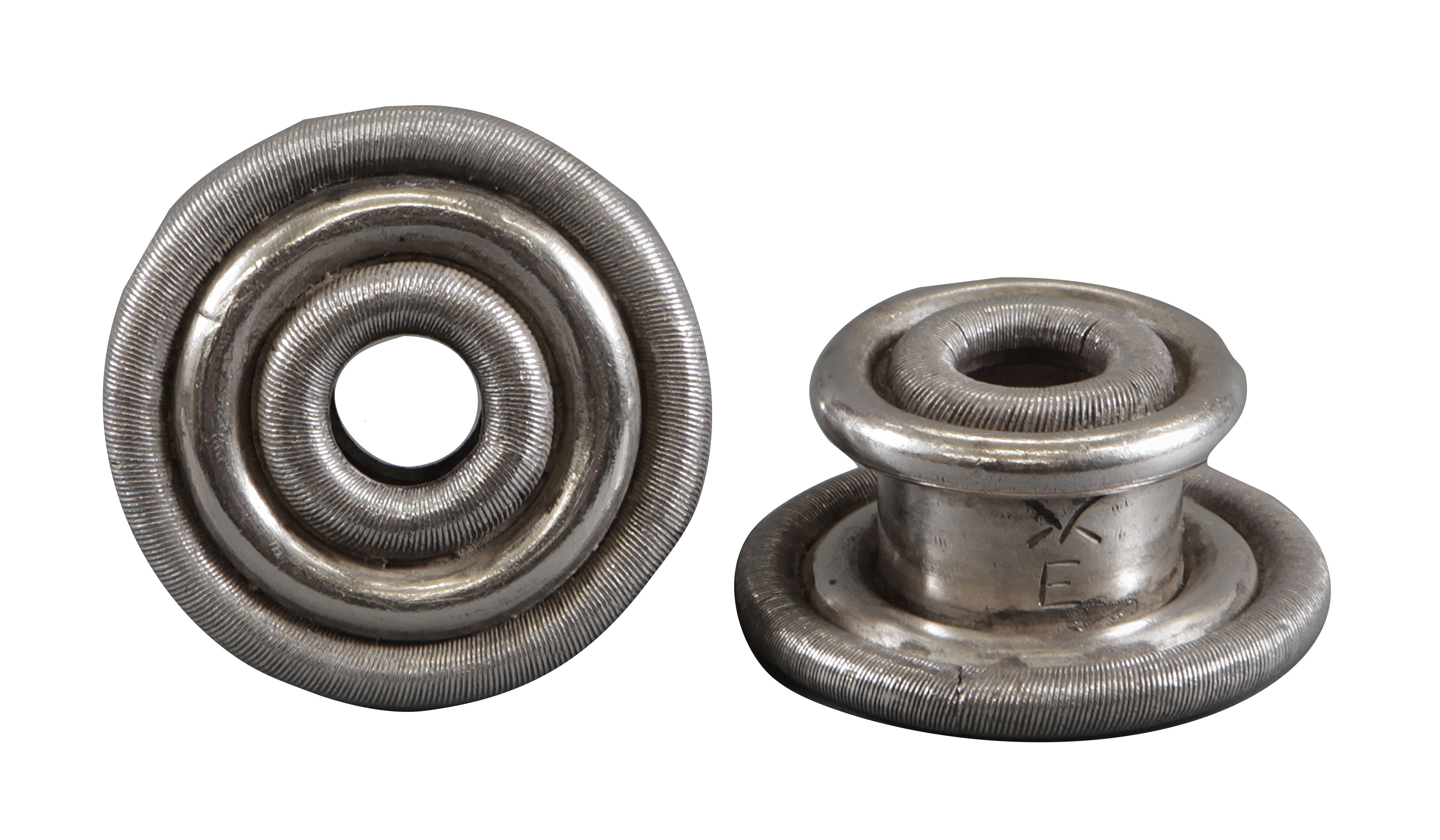 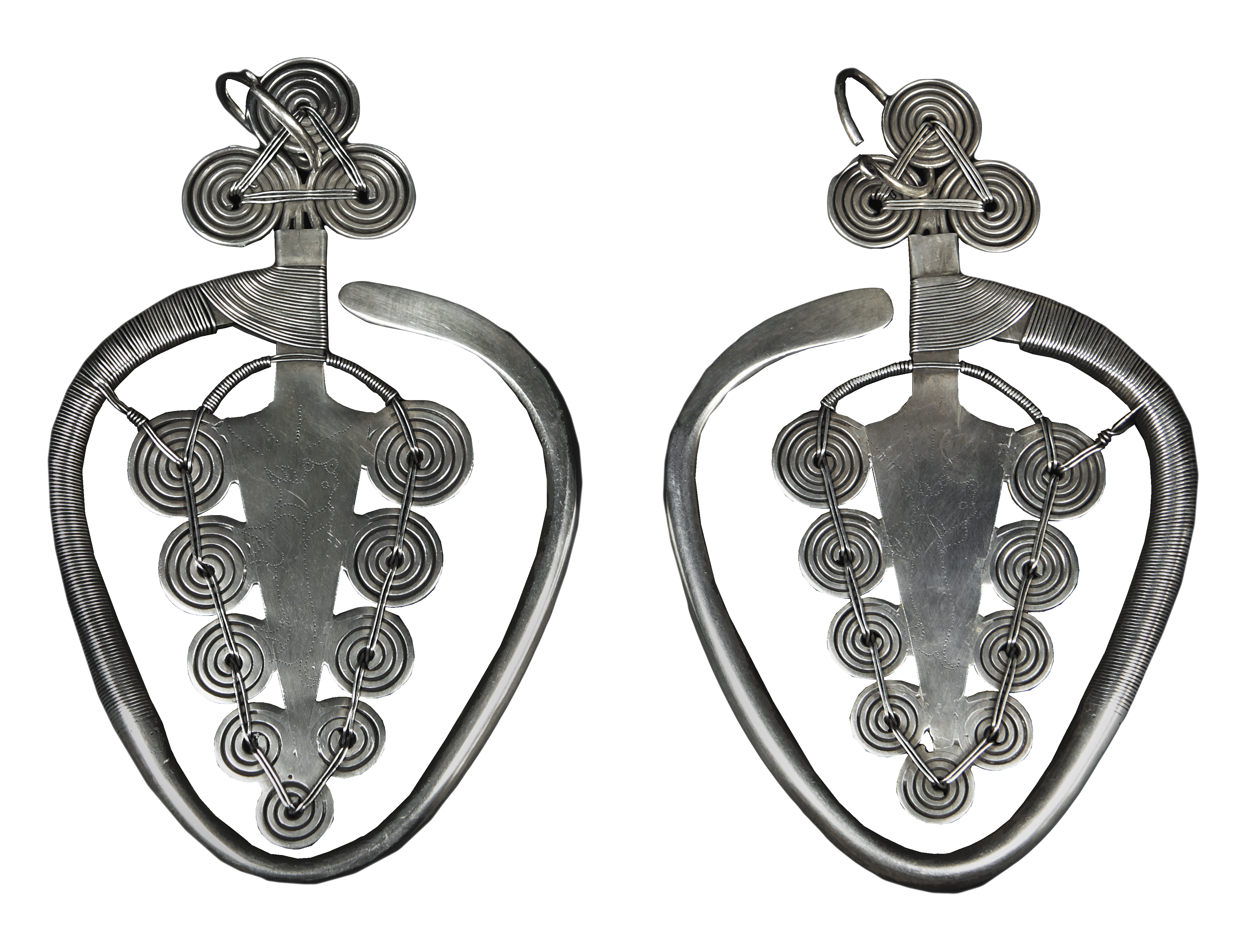 The sight of a horse outfitted with silver saddle is an ultimate display of wealth in Miao culture. Horses are used for transportation and cultivation and are symbols of prestige and affluence. They may be transferred as a girl’s dowry and take part in marriage processions.

Gift of Richard and Mary Cramer

This is one of the few objects in this installation made by a culture other than the Miao. Among Yao subgroups in the Guizhou Province women wear this headdress atop an indigo cloth wrap during wedding celebrations. Similar Yao headdresses with curved metal strips represent weapons used by legendary warriors to defend against invaders. 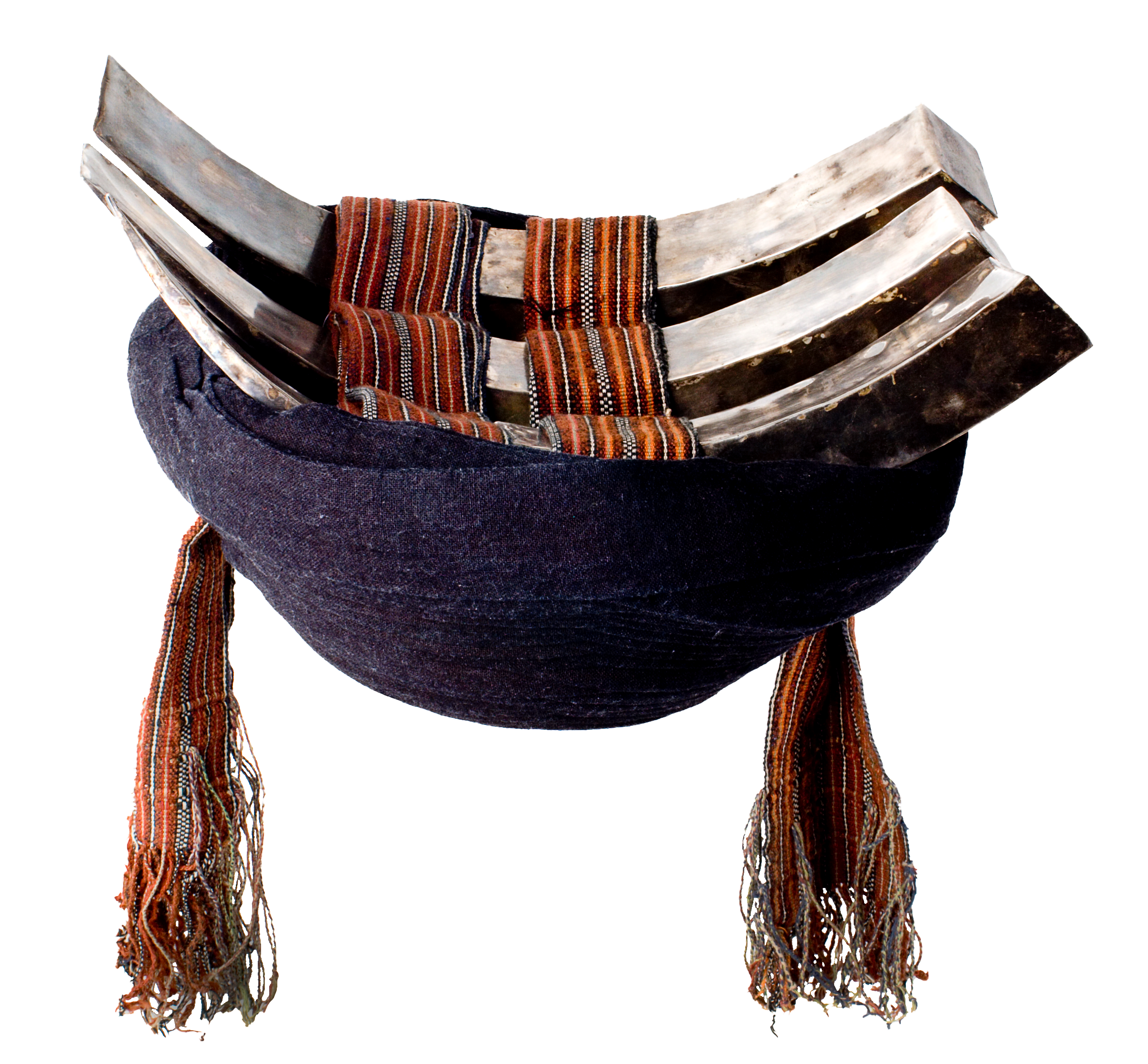 Publish modules to the "offcanvs" position.